By Chandni on June 2, 2015 in Experimental Labs, Radio System Design 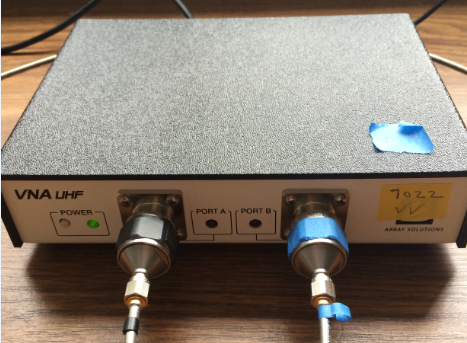 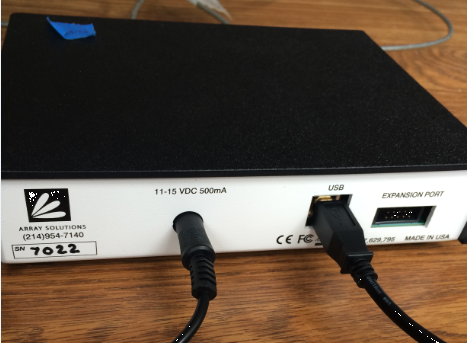 The circles in the above picture from left to right indicate power button, port A, port B, power input port, PC control port. Note on the left that the RF connectors are large. These are called N-connectors. The smaller cables are SMA cables. The names refer to the size, connector type and frequency range. On the output of the VNAuhf we have placed N-SMA adapters. The SMA cables attach to these adapters. 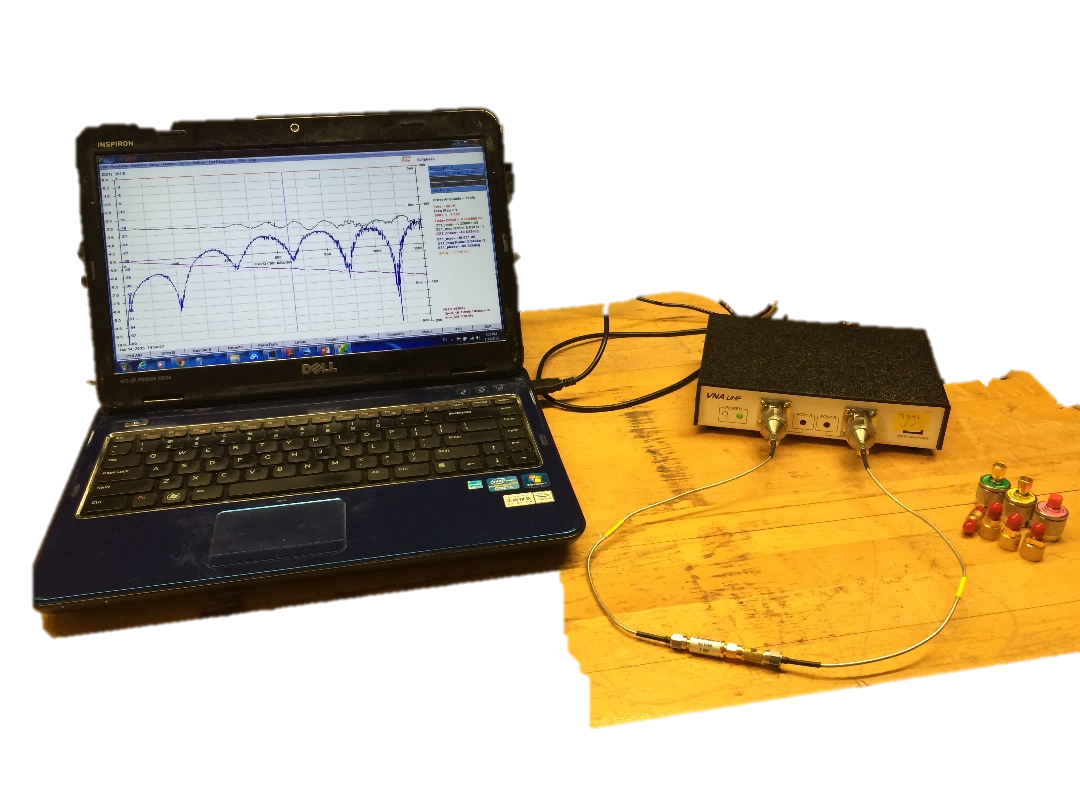 The function of calibration is to move the reference plane from the two outputs of VNA to the two ports of DUT (the ends of the SMA cables).

There are 4 different calibration terminations

It should be mentioned that calibration terminations provided in the lab are SMA termination connected to the SMA to N-type adapter. See the picture below. 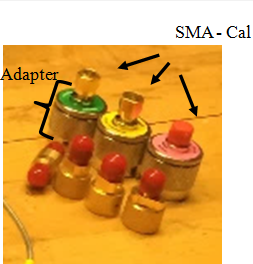 Before the calibration, the SMA calibration terminations should be removed from the N-SMA adapter since we are calibrating at the end of the SMA cables and thus will need a calibration standard with SMA connectors. We keep them on the n-SMA adapters as they are too small to label, but the adapters are labeled, so we can remember which standard is which. Note the “OPEN” is just a plastic cap – instead of moving the plastic cap to the SMA cable for the Open Termination, you can just leave the SMA cable end “open”, i.e. nothing attached. At higher frequencies a precise OPEN is needed so there is actually a termination that is attached. In our work we are low enough in frequency, simply leaving the cable “open” is good enough.

Click on the Calibrate menu. Click Standard Cal to calibrate the full range (5kHz to 1200MHz) of the VNA.

In Port A mode, SWR and input impedance can be measured. In Port B mode, S11 and S21 can be measured. The mode can be switched by clicking “Port A/B” button on the left lower corner of the software platform. The steps of SWR measurement of 50 Ohm load is given as an example. This example is not scored, but operating the example helps to use the software and examine the calibration.

Connect a 50 Ohm Load Termination to Port A connector. Choose Port A mode. The current Port status can be observed from the bottom tool button named as “Scan A”. Note: the Load Termination is a precision 50 resistance that has been tuned/measured for the whole frequency range. Its parasitics have been minimized or, in advanced systems, measured and are included in software the VNA uses for calibration. A 50 thru-hole resistor would not work above a few MHz.

Click on Scan A from the bottom buttons to scan SWR on full frequency. SWR stands for Standing Wave Ratio. The concept of standing waves was not covered in class, but you can find a quick tutorial at: https://en.wikipedia.org/wiki/Standing_wave_ratio When you are impedance matched, it is 1. When you have an open termination, it is 2 and when you have a short it is 0. The value of SWR can be read from left axis. The right sidebar indicates the value on where the cursor is placed. Because the transmission line and load is perfectly matched, SWR should be equal to 1. Examine SWR plot and compare the plot with analysis.

The data can be saved as either a picture or a data list. Click on the File menu. Click Save Image BitMap to save the graph as a picture. Click Save Port A Graph to save the graph as a data list. Though the data file is saved in .scn format, the data file in .csv format with the same file name is generated simultaneously in the same category. The data file in .csv format can be opened in Excel which can be used to plot the SWR curves in Matlab. 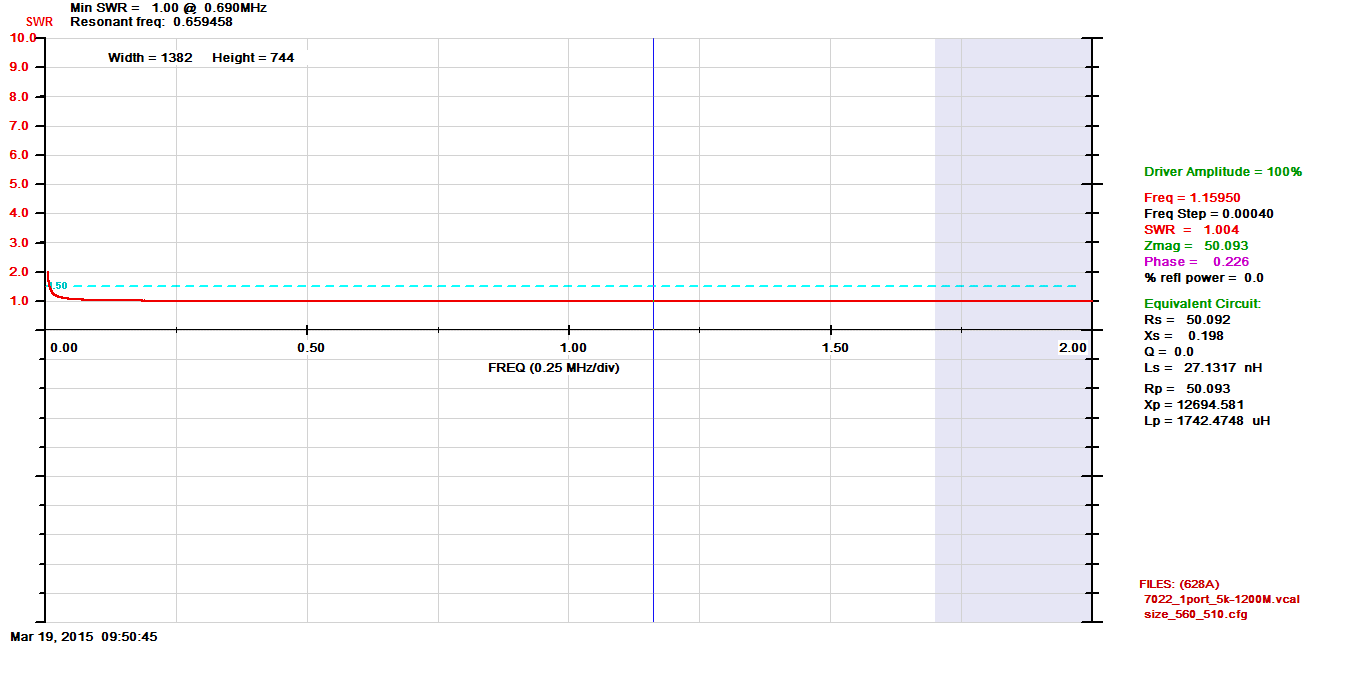 There are twelve bottom buttons (the bold is important):

Click Smith on the bottom buttons. The smith chart for Port A is shown below. The green circle is reference circle for SWR=1.5. The red curve is the measured curve. The graph below is an example for Smith chart when the VNA connects to 50 Ohm load. 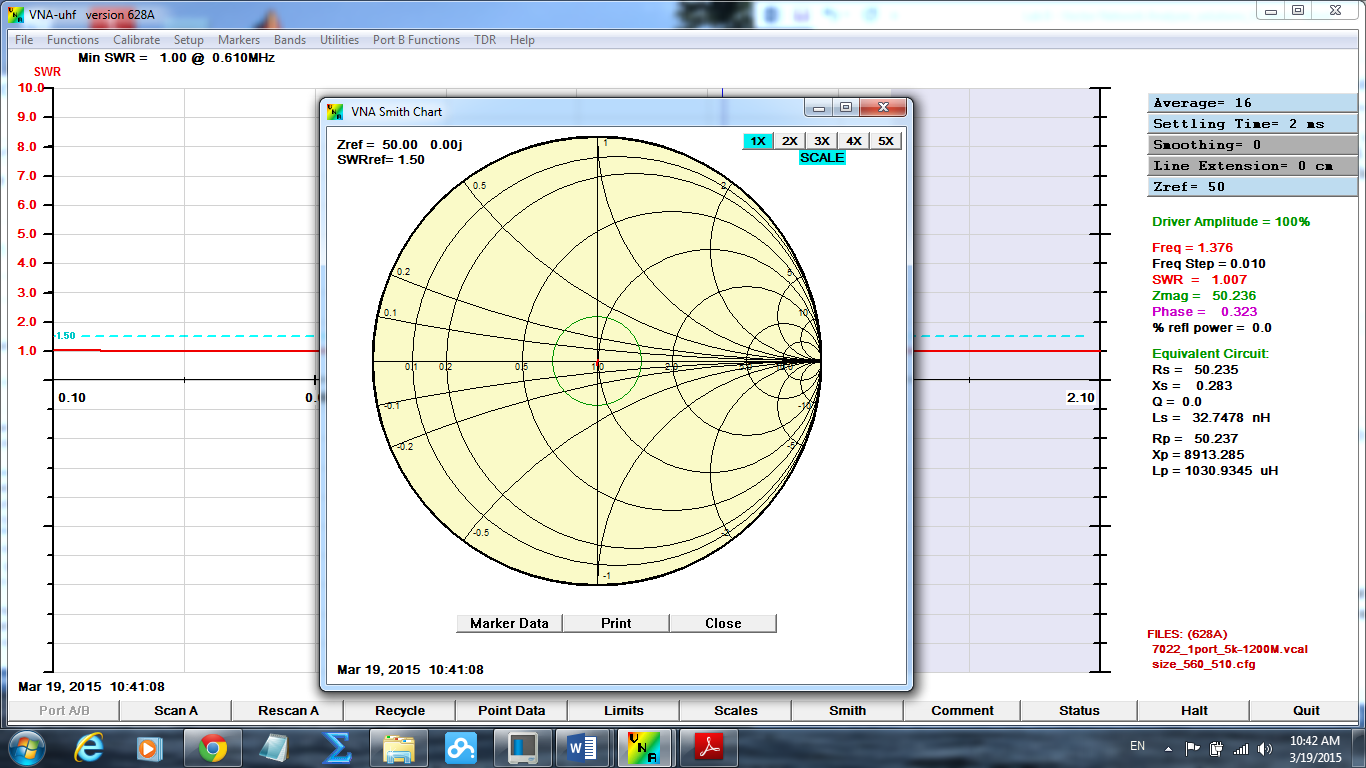 Power on VNAuhf. Complete two-port calibration over the full range frequencies. Our DUT for this assignment is a SMA cable with the Short termination at one end. Note that you do not disconnect the SMA cables attached to the VNAuhf – they are your measurement connections that are now calibrated. Use the third cable provided and the Short Termination as you DUT. Connect the end of the DUT without the Short Termination to Port A.

Port A/B mode measurement is used for 2-port DUT. If Pot A/B is not black on the lower menu bar, you may need to restart or recalibrate. If you calibrated in A/B mode it should be there.

Power on VNAuhf. Complete two-port calibration on full range frequencies. Our DUT is now a 20 dB attenuator that is placed between the two measurement SMA cables.

Change the plot parameters to S11 and S21.

View all posts by Chandni →